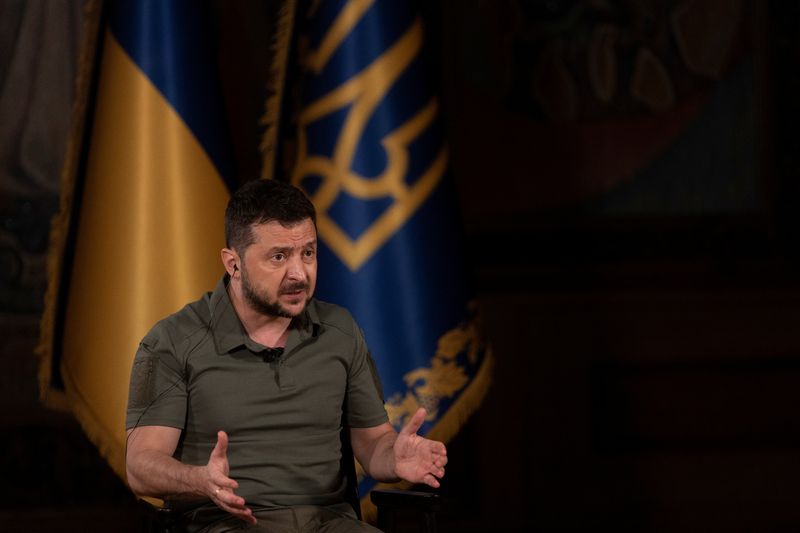 Zelenskiy, in an a recorded address to the U.N. General Assembly, said Kyiv had a five-point plan to establish a durable peace – but rejected any suggestion that his ex-Soviet state should adopt neutrality.

And he ruled out any peace proposal other than the plan proposed by Ukraine.

“…This is the first item of our peace formula. Comprehensive item. Punishment,” Zelenskiy, wearing his trademark khaki tee shirt, told the assembly.

“Punishment for the crime of aggression. Punishment for violation of borders and territorial integrity. Punishment that must be in place until the internationally recognized border is restored.”

But he added: “What is NOT in our formula? Neutrality. Those who speak of neutrality, when human values and peace are under attack, mean something else.”

Many delegations gave Zelenskiy a standing ovation after his speech. The Russian delegation remained seated.

Seeking membership of the Western military alliance NATO and the European Union is enshrined in Ukraine’s constitution. Russia said even before starting its invasion in February that NATO membership for Ukraine was a “red line” that could not be breached.

Zelenskiy ruled out “that the settlement can happen on a different basis than the Ukrainian peace formula. The further the Russian terror reaches, the less likely it is that anyone in the world will agree to sit at one table with them.”

Ukraine and its Western allies have accused Russian forces of war crimes in different parts of the country they have occupied. Russia denies the allegations and says it does not target civilians.