We are confident of winning over 200 seats in MCD polls: BJP’s Adesh Gupta 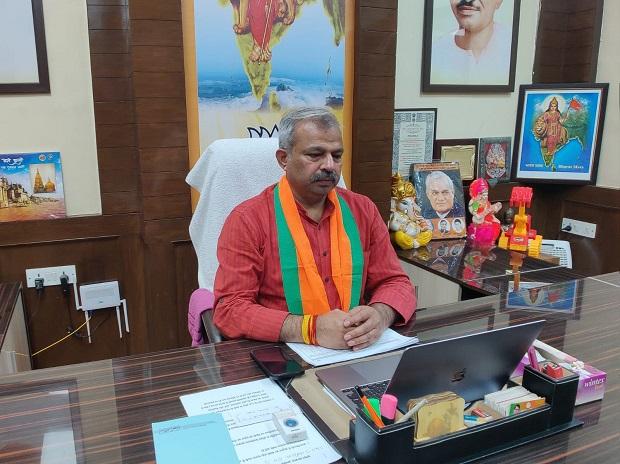 Adesh Gupta, president of the BJP’s Delhi unit, has expressed confidence of winning more than 200 seats in the December 4 polls for the 250-ward Municipal Corporation of Delhi (MCD), saying that the party’s candidates have public support whereas the AAP’s image has been tarnished due to corruption and scams.


Gupta made the remarks in an interview with IANS. He said the “love and support” that the people in the national capital have given to the BJP is “giving us confidence that we will definitely secure a new term”.


“There are so many achievements of the party be it beautification of parks, removal of 500 garbage dumps. Our candidates have public support. The ‘imaandar’ image of the Aam Adami Party has been tarnished because of corruption and scams,” he added.


Here are some excerpts from the interview:


Q. What do you think about the AAP manifesto? Will it make any impact on getting votes?


A. Arvind Kejriwal has not fulfilled any of his promises. He promised to clean the Yamuna river but he did not. The Centre had also given him Rs 2,500 crore to set up STP plants, but did not. He also promised to control air pollution.


Earlier he used to blame the Punjab and Haryana governments for air pollution but now that Punjab has an AAP government, he has shifted the blame to the Centre and the L-G of Delhi. He doesn’t have the intention to do anything for the welfare of the people. He has set a Rs 1 crore budget to clean the Najafgarh Dam but Rs 800 crore for advertisement.


Ultimately, the public will decide who will work for them.


Q. How many seats are you expecting to win?


A. We are expecting to win more than 200 seats. The BJP is way ahead then the AAP. Every scam and corruption of AAP is out, people know their intentions now.


Q. Will the absence of Congress’ aura make any impact ?


Q. Out of all the weak points, anti-incumbency is the weakest, what is your comment on this?


Q. What does the MCD have in store for the youth and new voters ?


A. We are meeting in small groups to cater to the needs of people. Thousands of such meetings are being held. Pocket meetings for women and old in society. We are even meeting professionals and we are trying to cover every segment of the society.


Q. The AAP is attacking BJP for the garbage issue. Manish Sisodia also visited the landfill site and took a dig at your party, what is your comment?


A. If we talk about landfill sites, we are reducing 11,000 tonne garbage daily. This is the first of its kind in India that we are making electricity from the garbage. We have removed 500 garbage houses in Delhi. With the help of the Centre, we are reducing the height of landfill sites, segregating the garbage, and sending that to an electricity producing plant. In the last two years we have removed one-third of garbage from the landfill site and will remove the rest by 2024.


Q. AAP’s freebies always work. What is your stand on their freebie culture ?


A. There are no freebies they are giving to the people of Delhi. Many jhuggi people are getting a Rs 1,000 bill per month. There are freebies only for their own leaders. They are filling their own pockets in the name of freebies.


Q. What is your stand on the BJP not having a face for Delhi state?


A. Every worker is our face, they are our strength. The AAP doesn’t have workers who can go door to door campaigning and people recognise our workers. Our workers are not like theirs who were at home when the Covid-19 pandemic was raging in the country. It was our workers who were on roads to collect and clean the garbage. People know this and support us because we work for them.


(Deepika Rathour can be contacted at [email protected])