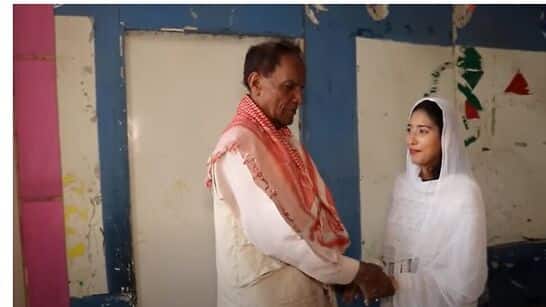 Pakistan: People often say love is blind here is the prime example of the quote, as seen by the widely shared love tale of a Pakistani couple who overcame everyone by getting married despite their differences in age. A Pakistani YouTuber Syed Basit Ali recently revealed the love tale of the pair, who have been identified as Liaquat Ali, 70, and Shumaila Ali, 19, it quickly became a social media sensation. During their morning walks, Shumaila and her husband—a man who is about 50 years older—married.

Just a few months before that, he shared the unique love story of a 19-year-old girl and a 70-year-old ‘baba’, who fell in love after meeting each other during morning walks. Liaquat Ali said he met his wife Shumaila during daily morning walks in Lahore. The love affair began when one-day Liaqat started humming a song while jogging behind Shumaila.


“One doesn’t see age in love. It just happens,” said Shumaila.When asked if her parents had any objection to their marriage, the 19-year-old said: “My parents objected for a while but we were able to convince them.”

When Syed asked if people with vast age differences should marry or not, Liaquat said: “There is no question about someone being old or young. Anyone who is legally allowed to marry can marry.” His wife said that personal dignity and honour should be considered before anything else in a marriage.

New York: India`s permanent representative to the United Nations, Ruchira Kamboj, said that terrorism remains a global challenge and only a unified and...
Read more
World

North Korean authorities allegedly executed two minors for the crime of watching and distributing South Korean movies, according to a Friday report. Sources who...
Read more