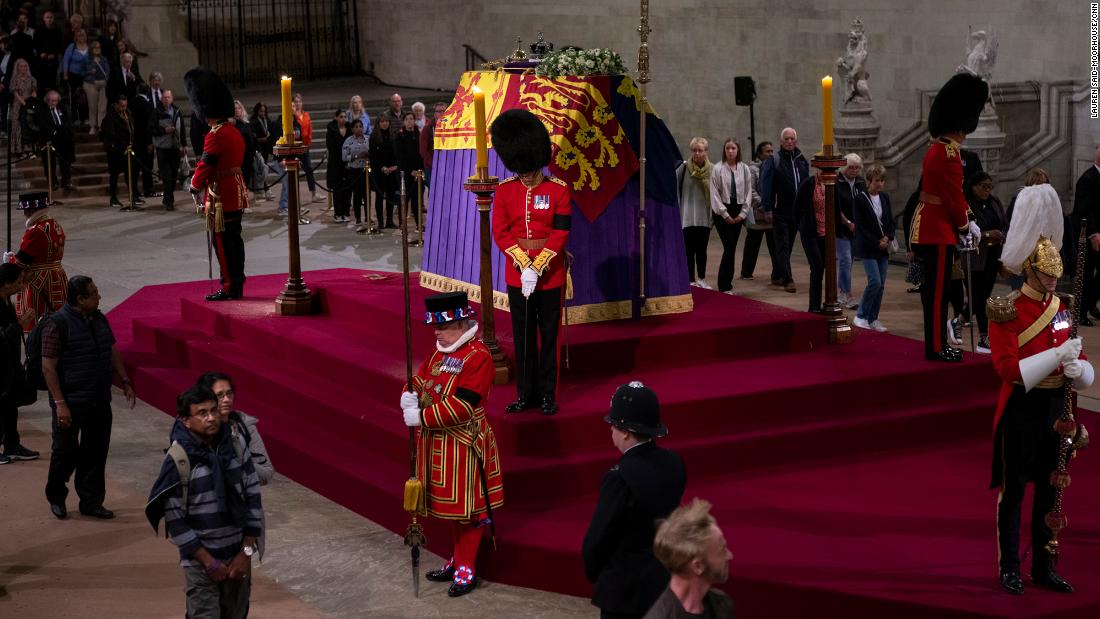 The coffin of Queen Elizabeth II is escorted by Royal Navy sailors as it travels from Westminster Abbey to Wellington Arch after the monarch’s funeral in London on Monday, September 19. (Will Lanzoni/CNN)

Across the United Kingdom, people have been paying their respects to Queen Elizabeth II, who died earlier this month at the age of 96.

The Queen reigned for an incredible 70 years, and for many in the UK she is the only monarch they have ever known.

CNN was on the ground for the Queen’s funeral and the 10 days of events leading up it, witnessing her final journey.

On Monday, the Queen’s coffin traveled to Westminster Abbey for her state funeral. Heads of state and dignitaries from around the world joined members of the royal family for the service.

Afterward, the royal cortege made its final journey out of London to St. George’s Chapel within the grounds of Windsor Castle, where the Queen would be laid to rest alongside her late husband, Prince Phillip.

Elizabeth Taylor says she was named after the Queen. “We’ve never known life without the Queen,” the 10-year-old said. “I cried for five hours when I heard the news. … She feels like family.” (Abbie Trayler-Smith for CNN)

Christine came to London to pay her respects from the Bahamas, a Commonwealth country and former British colony. “She’s done so much for our community in the Bahamas,” Christine said of the Queen. “She’s going to be missed, and we thank her for her service.” (Abbie Trayler-Smith for CNN)

Mr. and Mrs. French, a couple from Essex, England, came to Hyde Park to watch the funeral. “My family worked for the Queen,” he said. “For me this is a moment in history.” (Abbie Trayler-Smith for CNN)

Harvey said he made a Scouts promise to serve the Queen. “It’s crowded, but everyone wants to be here,” he said. “The atmosphere is crazy. We’ll never see this again.” (Abbie Trayler-Smith for CNN)

For four days before the funeral, mourners packed the streets of the British capital for a chance to see the Queen’s coffin as she lied in state at Westminster Hall.

A line of people, aka The Queue, stretched for several miles. People waited for hours, sometimes overnight, with little opportunity to rest as the line kept moving.

Richard and Emma Hawkins came from Nottingham, England, to pay their respects to the Queen. “It’s historic,” Emma said. “One minute we’ve been happy and the next (the line) feels like never ending.” (Abbie Trayler-Smith for CNN)

Paige came from Haslemere, a town southwest of London. “It’s nice to feel a part of something,” she said. “I just wanted to come and see to take it all in. … We’ll never have another queen in our lifetimes.” (Abbie Trayler-Smith for CNN)

Ashley arrived in London from the Midlands around 11 p.m. Friday to join The Queue. “I’ve been listening to the media for days about how people have had this wonderful experience of meeting people and making friends, and I didn’t expect it to happen to me,” he said. “But we’ve just had the most wonderful time.” (Abbie Trayler-Smith for CNN)

Farkhanda Ahmed and her mother, Shakeela, came from Slough, a town in Berkshire, England. “We had goosebumps,” Farkhanda said. “Such a beautiful moment. You could hear a pin drop. … As soon as we got in there my legs stopped hurting and I forgot about the queue. A truly incredible experience.” (Abbie Trayler-Smith for CNN)

Paul and Tom Rayner, father and son, run Blissetts, a supply store in London. “We put the flag up on Tuesday, as a sign of respect,” Tom said. “We are born and bred Londoners. We always put it up for the Olympics, the football. I’m proud to be British.” (Abbie Trayler-Smith for CNN)

Lorenzo is a barista at The Cable Cafe in London. “I think it’s made people think about their own grief,” he said of the Queen’s death. “This woman has been there since they were born, and now she’s not and that has probably started a lot of grief. Something has died with the Queen I guess.” (Abbie Trayler-Smith for CNN)

Festina works at a Caffe Concerto in London. “It was very sad, the mood,” she said. “But there are so many people here. I’ve never seen it like this. All day we are serving so many people.” (Abbie Trayler-Smith for CNN)

John Sheridan has been a London cab driver for 22 years. He said about half of his jobs this week have been for people trying to get near Buckingham Palace. (Abbie Trayler-Smith for CNN)

When Edward Lyford was 8 years old, he camped in Trafalgar Square with his family to see the Queen’s coronation the following day. “She was the best, the best you could hope for, the best in history,” he said. (Will Lanzoni/CNN)

This news clipping from 1952 shows Lyford camping in Trafalgar Square with his two brothers and his mother. “I think everyone respected (the Queen) whether or not they believed in the monarchy,” Lyford said. (Will Lanzoni/CNN)

The Queen was at her Scottish country estate in Balmoral when she died on September 8.

Her coffin was flown to London five days later and taken to Buckingham Palace for the night before the next day’s procession to Westminster Hall.

The Union Jack and the flag of Wales appear on the hat of Cynthia Osborne. Osborne, a former nurse, has gone to as many royal events as she’s been able to, including the weddings of Diana and Charles, Harry and Meghan and William and Kate. (Will Lanzoni/CNN)

James grabbed a spot to watch the procession. “She has been all we’ve known,” he said of the Queen. “She symbolizes Britain, and she has been amazing. I work worldwide, and she is revered everywhere.” (Abbie Trayler-Smith for CNN)

Colin Bishop served in the British Army for 28 years. “I swore an oath of allegiance to the Queen,” he said. “And now I’m going to pay my respects.” (Will Lanzoni/CNN)

Jackie Alexandrou and Caroline Burnard came from Brighton to watch the procession. “We came to pay our respects to a Queen that served us to the very end,” Jackie said. “What an amazing woman.” (Abbie Trayler-Smith for CNN)

The Queen is seen next to an escalator inside a London Underground station. (Will Lanzoni/CNN)

Flowers are placed on a Union Jack flag at the Queen Mother Memorial in London. (Will Lanzoni/CNN)

Flags with the face of the Queen are sold at a souvenir shop on Westminster Bridge. (Will Lanzoni/CNN)

A TV camera aims down the Mall toward Buckingham Palace. (Will Lanzoni/CNN)

A farewell to Scotland

Before the Queen’s coffin left Scotland, thousands of people lined the route of the royal cortege as it made its way across the country. The hearse carrying the coffin made a six-hour journey from Balmoral Castle to the Palace of Holyroodhouse, the official residence of the British monarch in Scotland.

The next day the coffin proceeded down the Royal Mile for a service at St. Giles’ Cathedral, where it lied at rest for 24 hours.

Jia Ni caught a glimpse of the procession in Edinburgh. “The Queen is a role model for everyone across the world,” she said. “This is a big moment. We came to show our respects.” (Toby Hancock/CNN)

“I felt it necessary to be here today,” said Tracy Smith. “The Queen has always been there. She is everyone’s granny. She has been an inspirational leader.” (Toby Hancock/CNN)