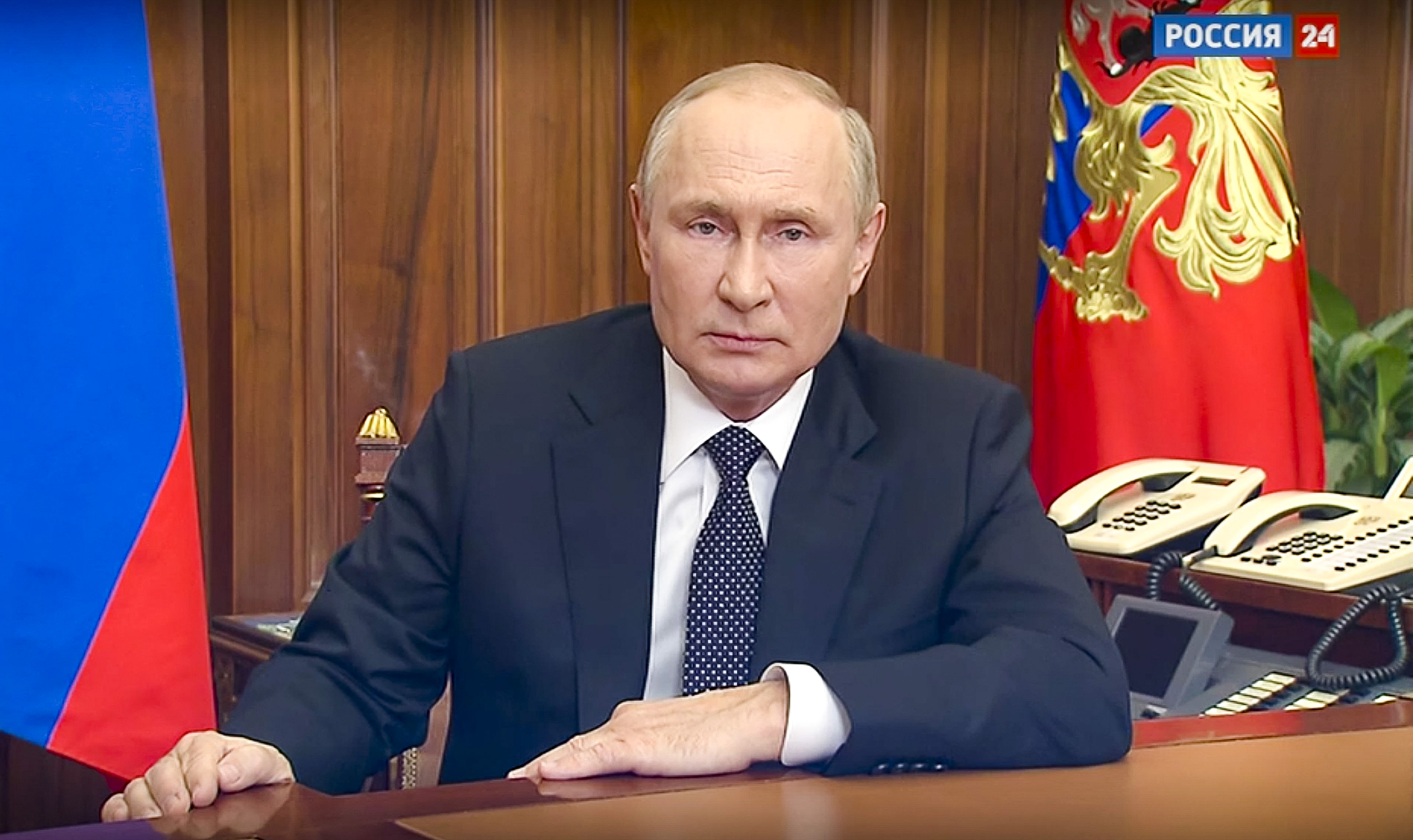 Russian President Vladimir Putin announced the partial mobilization of his country’s military Wednesday, calling up military reservists in a significant escalation of his war in Ukraine after a series of setbacks that led to growing pressure on the Kremlin to act.

In a rare national address, the Russian leader also signaled the Kremlin planned to annex occupied areas of southern and eastern Ukraine and threatened nuclear retaliation if Kyiv continues its efforts to reclaim that land.

The speech came just a day after after four Russian-controlled areas of southern and eastern Ukraine announced they would hold votes this week on formally joining Russia, in a plan Kyiv and its Western allies dismissed as a desperate “sham” aimed at deterring a successful counteroffensive by Ukrainian troops.

Russia’s parliament also approved a bill to toughen punishments for a host of crimes, including desertion and surrender, if they are committed during periods of mobilization or martial law.

The sudden flurry of activity signaled that the Kremlin intends to not just dig in but to ramp up its efforts in a conflict that has dragged on for nearly seven months and recently tilted away from its forces. Its public backers delighted in the prospect of an “all-out war” and a new confrontation with the West, which warned holding “sham” votes in those areas would represent an illegal escalation.

Until now, Putin had resisted calls from nationalist supporters and pro-military bloggers for a general mobilization since launching his full-scale invasion of Ukraine on Feb. 24.

It was unclear what impact holding the moves would have on the ground.

The Kremlin has insisted that what it calls its “special military operation” in Ukraine is going according to plan, but military observers have said Russian forces are depleted and increasingly dispirited.

The general mobilization could boost Putin’s ailing forces, but will likely take time to have an effect on the battlefield and could also prove unpopular with a Russian public it has sought to insulate from the effects of the war.

The swift developments came just a week after Ukraine successfully reclaimed swaths of territory, in what many observers said could be a decisive shift in the conflict.

Under growing pressure, the Kremlin has seemingly now acted.

Separatist officials in the eastern areas of Luhansk and Donetsk, as well as the southern Kherson region and partially occupied Zaporizhzhia, announced that they would hold votes on leaving Ukraine and joining Russia over four days starting Friday, Russia’s state news agency Tass reported.

It wasn’t clear if the proposed annexation would cover the entire territory of the provinces or only the areas currently occupied by Russian forces.

Washington condemned the planned votes as a “sham” it would never recognize.

“We are aware of reports that President Putin may be preparing to enact mobilization measures. Like its sham annexation planning, this is reflective of Russia’s struggles in Ukraine,” said White House National Security Adviser Jake Sullivan.

French President Emmanuel Macron called the planned votes “cynical” and “a parody.” Speaking in New York, where world leaders are attending the United Nations General Assembly, Macron told reporters that if the “idea wasn’t so tragic it would be funny.”

Kyiv has been boosted by Western-supplied weapons, including long-range rocket systems supplied by the U.S., leading voices on Russian state media to argue that the country is fighting not just Ukraine but NATO as well.

One of the Kremlin’s most hawkish figures, former President Dmitry Medvedev, said Monday that holding the referendums was “of great importance,” while signaling that absorbing the Donbas provinces would make encroaching on them equivalent to striking Russia, raising the risk of further escalation if Ukrainian troops continue to advance in the area.

The editor-in-chief of the Kremlin-backed channel RT, Margarita Simonyan, who has been one of the most vocal proponents of the war, also invoked the idea of red lines.

“Today a referendum, tomorrow — recognition as part of the Russian Federation, the day after tomorrow — strikes on the territory of Russia become a full-fledged war between Ukraine and NATO with Russia, untying Russia’s hands in all respects,” she said in a post on Telegram.

News of the planned referendums was condemned by Kyiv.

“Sham ‘referendums’ will not change anything,” Foreign Minister Dmytro Kuleba said. “Ukraine has every right to liberate its territories and will keep liberating them whatever Russia has to say,” he said in a tweet.

“This is what the fear of defeat looks like,” Yermak wrote in a post on the Telegram messaging app.

Russia held a vote to annex the Crimean Peninsula in 2014, with most of the international community rejecting the results.

But this time, the referendums come amid a full-scale invasion.

Russia captured the entire Luhansk region in July after fierce fighting, and has been battling Ukraine’s forces in neighboring Donetsk. The two provinces together form the industrial Donbas region, which Moscow has made the primary goal of what it calls its “special military operation” since failing to seize the capital, Kyiv.

Russian-backed separatists in the region had been fighting Ukrainian forces in a deadly conflict since 2014. Putin recognized the independence of the breakaway regions in the buildup to his full-scale invasion of Ukraine in February.

Kentucky’s floods have been devastating. Timing is a key reason, an expert said -MONEY CRIPTO NEWS