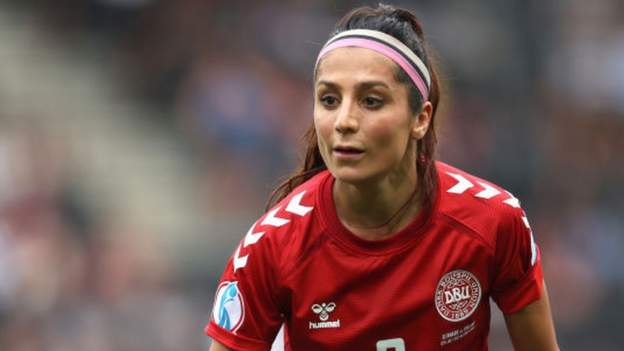 ITV World Cup pundit and Denmark forward Nadia Nadim says she has “lost the most important person in my life” after the sudden death of her mother.

The former Manchester City player, 34, had left the broadcaster’s coverage of the 0-0 draw with Denmark and Tunisia before full-time on Tuesday.

Nadim has revealed her mother had died after being hit by a truck on Tuesday morning on the way back from the gym.

“Words can not describe what I’m feeling,” she said.

In a statement on Wednesday, she wrote: “I have lost the most important person in my life and it happened so sudden and unexpected. She was only 57.

“She was a warrior who had fought for every inch of her life. She didn’t give me life once but twice, and everything I/we are is because of her.

“I have lost my home and I know nothing’s gonna ever feel the same. Life is unfair and I don’t understand why her and why this way. I love you and I will see you again.”

“Everyone at ITV, those working with Nadia in Qatar, and the wider company, is deeply shocked and saddened by this tragic news,” ITV said.

“We have offered Nadia our support and our thoughts are with her and those closest to her at this incredibly difficult time.”

Nadim was born in Afghanistan and her family fled to Denmark after her father, an army general, was executed by the Taliban in 2000.

She has gone on to play for clubs including Portland Thorns and Paris St-Germain, scoring 38 goals in 103 games for Denmark.