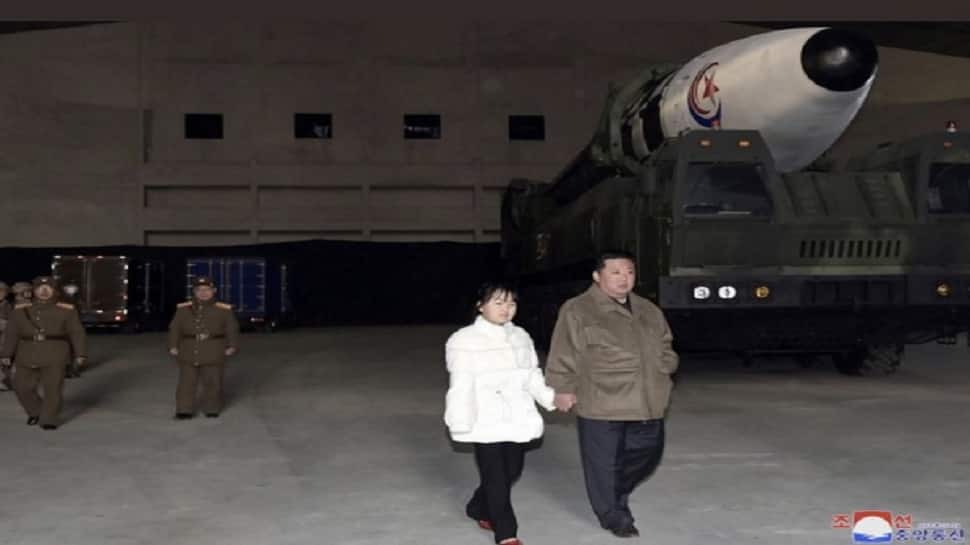 Pyongyang: North Korean leader Kim Jong Un`s daughter made her first public appearance last week, accompanying her father to oversee the launch of “a new type” of an Intercontinental ballistic missile (ICBM) on Friday. And while much is not known about her, some North Korean analysts say that she has quite a pleasant life! According to New York Post, she resides with her family in their enormous beachfront villa in Wonsan, which falls in the province of Kangwon. She`s believed to have two siblings, one of whom is elder.

New York Post reports that the estate, which has been compared to Florida`s `Mar-a-Lago`, is located on east North Korea`s beautiful Sea of Japan beaches and has swimming pools, tennis courts, soccer fields, waterslides and a sports stadium. Florida`s `Mar-a-Lago` is a huge resort owned by former US President Donald Trump.

When they get tired of Wonsan, the family has about 15 other mansions and palaces scattered throughout the nation that they travel to via an elaborate underground network of tunnels and railways in order to escape the prying eyes of nearby foreign intelligence satellites, according to North Korean experts.

New York Post has quoted Michael Madden, a non-resident fellow at the Stinson Center and an expert on North Korea, according to whom, the 9-year-old gets plenty of attention, love and care from her parents. “She has a very nice life,” Madden told The Post of Ju Ae.

“She and her siblings have a full complement of nannies and housekeepers but they also hang out with their parents a lot. Kim Jong Un`s dad was a hard guy but was very attentive to his kids too. When you`re a dictator you get to choose how you spend your time,” he said.

On November 19, Ju Ae saw the launch of a new intercontinental ballistic missile at Pyongyang International Airport alongside her parents and government officials. The state-run Korean Central News Agency (KCNA) released pictures where Kim was seen hand in hand with his daughter.

Photos from the event show Kim and his daughter, who was dressed in a white jacket, red shoes, and her hair pulled back, watching the launch from a distance.

“When you look at that picture of him holding her hand you can see a degree of intimacy and you can see it`s something she`s used to,” Madden told New York Post.”This is not just a photo op,” he added. At the same time, it is a photo op, Madden explained.

According to Madden`s statement to New York Post, “North Korea likes to kill five birds with one stone with their messaging.”

“I think the affection is real but they clearly are trying to humanize Kim Jong Un and trying to make him appear as normal as possible. His father cultivated an aura of mystery. He used to say, `When the enemy looks at us they should look into a fog.` But now they seem to want less mystery and make Kim look like a normal family man. He represents a departure from his father.”

Additionally, North Korea seeks to convey to the outside world that the Kim family is firmly established as the nation`s rulers, much like a monarchy, as per Madden.

“Kim Jong Un is saying in these photos of him with his daughter: My regime is not going anywhere so get used to it,” Sean King, an Asia specialist at Park Strategies, told The New York Post.

“The Kim regime and North Korea is here to stay and here is the next generation. The nukes aren`t going anywhere either.

“King added that Ju Ae and her siblings appear to have a happy life from what outsiders can see.”The family lives a very exclusive, barricaded life in these palaces,” King said.

“It`s a cloistered life but a good one. But of course, a lot of what the family does is not just a secret from us, it`s a secret to their own people as well.”However, as per New York Post, Ju Ae and her siblings are unlikely to study overseas, as opposed to their father.

According to the media portal, during the horrific North Korean famine of 1996, which resulted in the deaths of up to 3 million people, Kim was sent at the age of 12 to a prestigious private school in Bern, Switzerland, where an older brother had already gone to study. He was given over to an aunt who posed as his mother, eventually defected to the US, and opened a dry cleaning business in Manhattan. Currently, she resides in upstate New York.

Kim was described by a fellow student at the Liebefeld-Steinholzli school as a reserved kid who could be temperamental and was fascinated with basketball, particularly Michael Jordan. Additionally, he adored Jean-Claude Van Damme films.

According to his aunt, Kim loved basketball so much that he occasionally slept with a basketball next to his bed. He wore NBA jerseys, had a sizable collection of expensive Nike sneakers, and dressed up in fashionable tracksuits, but he never wore jeans because they were a symbol of the detested capitalism.

“KJU watches CNN all the time. He grew up watching `The Matrix` and listening to Prince and Madonna. His kids` minds might be a little warped but [Ju Ae] has access to the Internet, I assure you.”

Ottawa: Dozens of additional overseas Chinese "police service centres" have been found around the world, including at least two more in Canada, CTV...
Read more
World

Afghan women will be allowed to take high school graduation exams, according to the Taliban

Afghan girls will be allowed to take their high school graduation exams this week, an official and documents from the Taliban government indicated...
Read more