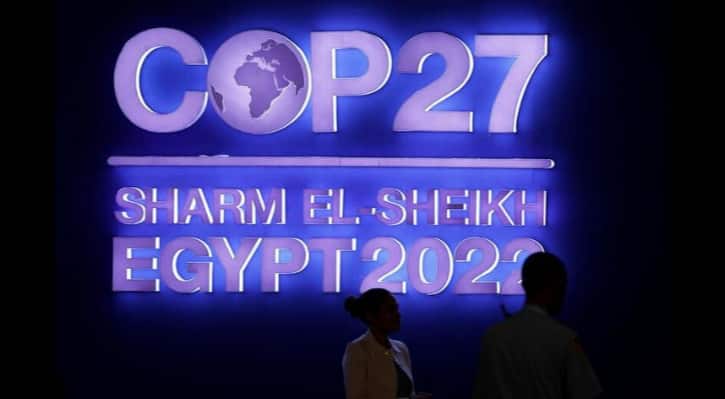 New Delhi: The UN climate summit in Egypt concluded on Sunday with a landmark decision to establish a fund to address loss and damage, but the outcome on other crucial issues such as India’s call for phasedown of all fossil fuels reflected little progress. India termed COP27 “historic” for securing an agreement on establishing a fund to address loss and damage due to climate change-induced disasters, saying “the world has waited far too long for this”.

On the establishment of a work programme on climate action in agriculture and food security, Union Environment Minister Bhupender Yadav said the responsibilities to reduce emissions should not be shifted to smallholder farmers. “For India, there were many positives to be drawn from COP27. The most significant for us was the inclusion of a sustainable lifestyle in the Sharm El-Sheikh Implementation Plan. “It is Hon’ble Prime Minister Shri Narendra Modi who has made the pitch for an environmentally-friendly lifestyle, through his mantra of Mission LiFE and the world today moved in that direction,” a blog post by Yadav read.

The summit was scheduled to conclude on Friday but went into overtime as negotiators pushed for an agreement on issues such as mitigation, loss and damage fund and adaptation. At one point in time, the talks veered close to a collapse but gained momentum in the final hours after progress on a new finance facility to address loss and damage, a long-pending demand of poor and developing countries, including India, and the key element at this year’s UN climate summit. The success of the talks hinged on progress on this track.

Developed nations, particularly the US, opposed this new fund

Developed nations, particularly the US, had opposed this new fund over fears that it would hold them legally liable for massive damages caused by climate change. The proposal for a loss and damage finance facility was put forward by the G77 and China (India is part of this group), least-developed countries and small island states. Vulnerable countries had said that they would not leave COP27 without it.

The conference agreed to set up a “transitional committee’ to decide how the money will be provided and who will contribute to the fund. Its recommendations will be discussed at COP28 next year. The hope at COP27 was to include a phasedown of all fossil fuels, including oil and gas, as proposed by India and backed by many developed and developing countries including the EU and the US, but the final agreement did not essentially build on what was agreed upon in COP26.

Negotiators said intense discussions took place on the matter late into Saturday night, but it could not find a place in the agreement. Many countries seemed dissatisfied with the final package but chose not to intervene as it would have risked the loss and damage deal that poor and vulnerable nations wanted for long.

However, when compared to COP26, the summit this year has brought in stronger language on renewables and included the just transition principles while bringing up energy transition, experts said.

Another sharp message from COP27 is to reform multilateral development banks to provide more climate finance without forcing developing countries deeper into debt, they said.

The Sharm-El Sheikh Implementation Plan called upon “parties to accelerate the development, deployment and dissemination of technologies, and adoption of policies, to transition towards low-emission energy systems, including by rapidly scaling up deployment of clean power generation.”

It also proposes energy efficiency measures, including accelerating efforts towards phase down of unabated coal power and phase-out of inefficient fossil fuel subsidies, while providing targeted support to the poorest and most vulnerable in line with national circumstances and recognising the need for support towards a just transition.”

The plan reaffirmed the Paris Agreement goal of holding the increase in the global average temperature to well below 2 degrees Celsius above pre-industrial levels, recognising that this would “significantly reduce the risks and impacts of climate change”.

Shruti Sharma, Senior Policy Advisor, International Institute for Sustainable Development said it is disappointing that COP27 did not build on the COP26 statement to deliver a stronger message on the phaseout of fossil fuels.

“COP26 asked parties to, among other things, transition to low energy systems through the phasedown of unabated coal phase down. The hope at COP27, through India’s proposal, was to include a phaseout of all fossil fuels, including coal oil and gas. Perhaps the most significant milestone for this COP has been the creation of a loss and damage fund,” she said.

“COP27 has been a tough pill to swallow but in the end, there has been more progress than was anticipated. The negotiators have debated on language but in the big picture, the world has saved one year from being wasted by not compromising on the language on 1.5 degrees temperature rise,” said Aarti Khosla, Director, Climate Trends.

This COP will be remembered for the agreement to create a loss and damage fund. The COP has demonstrated how geopolitics is shifting and each country has acted in its interests. There is also notable progress in including a scale of renewables, she said. “The countries fell short of agreeing to a phasedown of all fossil fuels, which speaks to the energy crisis and the hold of the oil and gas lobby at this COP, Khosla said.

Mohamed Adow, Executive Director, Power Shift Africa, said it’s sad to see countries just “copying and pasting the outcome from last year’s COP26 in Glasgow”. “It’s deeply saddening that countries couldn’t agree to commit to a phase down of all fossil fuels, not just coal, as contained in the Glasgow Pact. The science is clear, the impacts are getting worse and we know that renewables are the future. “Polluting countries need to leave coal, oil and gas in the ground if we’re going to keep global heating from running out of control, he said.

An international fugitive and child sex offender from Georgia was arrested on Saturday in Mexico after nearly five years of evading law enforcement.Brad...
Read more

USA bid farewell to Qatar. Now thoughts turn to a home challenge in 2026