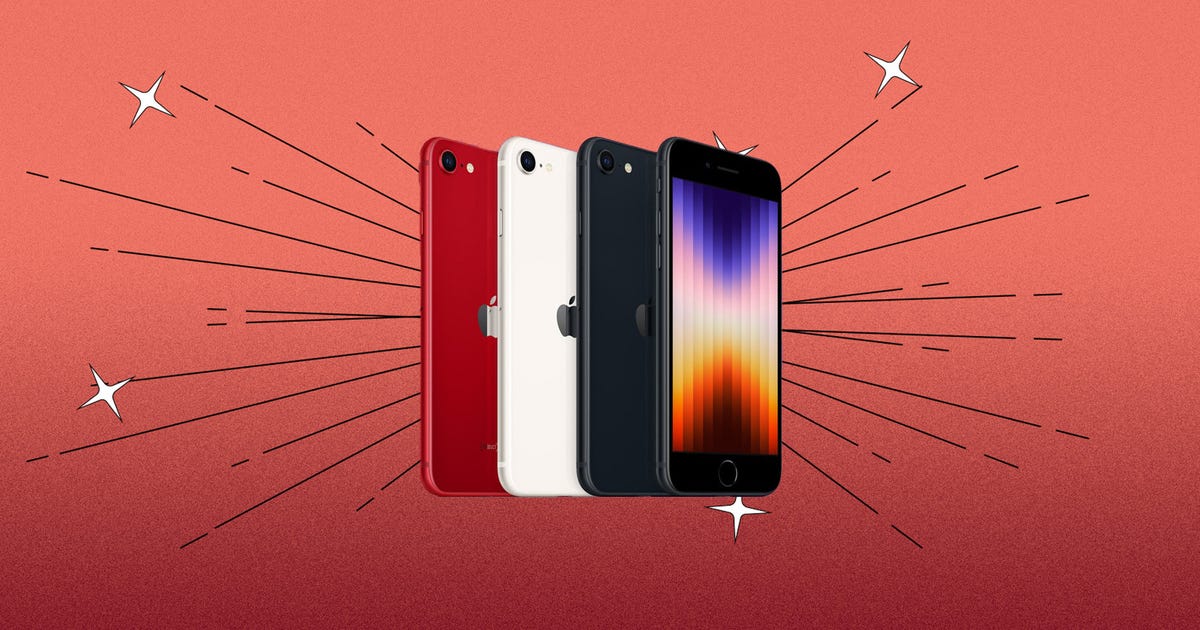 While the new iPhone 14 is certainly deserves the buzz it’s been getting, it’s not the only new Apple phone on the market right now. Back in March, roughly two years after its second-gen predecessor hit shelves, Apple release the upgraded iPhone SE 2022. This is the third generation in Apple’s budget-friendly SE lineup, and it starts at just $429 — nearly half the price of the $829 iPhone 14. Despite its affordable price tag, it still offers smooth performance and user-friendly interface that Apple is famous for, and thanks to the variety of deals and promotions out there, you can get your hands on one for even less right now. Some sellers are even offering a chance to grab a new iPhone SE for free, though you’ll jump through a hoop or two to get those deals.

One of the biggest upgrades to the iPhone SE 2022 is that it supports 5G, so you’ll be able to get faster data speeds while out and about (if you’re in a 5G-compatible area). Apple upgraded the processor to its A15 Bionic chip, and it has the same tough glass that’s used on the iPhone 14 series. It maintains the same overall size and design as the previous model, which means there’s a Touch ID sensor on the front. A 12-megapixel camera on the back is even more powerful thanks to the A15 processor.

What colors does the iPhone SE 2022 come in?

The iPhone SE 2022 is available in midnight (black), starlight (white) and Product Red.

While the iPhone SE isn’t getting quite the same amount of attention as then new iPhone 14, there are still plenty of great deals to take advantage of. Below, you’ll find our roundup of the best offers and deals out there to help you snag the new iPhone SE for less.

Somewhat surprisingly, Best Buy doesn’t seem to be carrying any unlocked models of the iPhone SE. But if you’re a T-Mobile customer, there is an offer you can take advantage of. Customers who use T-Mobile as their carrier can save up to $215 in monthly bill credits on their new iPhone SE. Just note that you’ll have to add a new line of service, and choose the 24-month installment plan to get the discount. T-Mobile customers will also get an extra $100 in savings, on top of the usual value, when they trade in a used device.

If you prefer to buy your new iPhone right from the source, you can do that with the iPhone SE. Apple has all the carrier models along with the unlocked one. And if you’re looking to ditch your old phone to switch to the new SE, Apple is offering up to $650 off with an eligible trade-in. With a base price of $429, that means that you could theoretically get the new SE totally free. If your trade-in value exceeds the cost of your new phone, you’ll receive an Apple Gift Card for the remainder. If your trade-in doesn’t cover the full cost, you can pay the remaining cost in full, or or split it into 24 months of interest-free payments when you use an Apple Card during checkout.

While Verizon deals on upgrading existing lines are pretty slim right now, there is a great offer available if you’re looking to add a new line of service. When you buy an iPhone SE on a new line with any unlimited plan, you can save $430, which gets you the 64GB model for free. Just note that the discount will be applied in the form of monthly credits over a three-month period, even if you buy the phone outright.

Plus, if you’re in the market for even more Apple devices, Verizon is offering up to $200 off iPads and $120 off select Apple Watches over a period of 36 months with the purchase of a new iPhone SE. This offer is valid for new and existing customers, but you are required to have a data plan for the new device as well as the phone.

T-Mobile is offering deals to both new and existing customers at the moment. If you’re already a T-Mobile customer, you can save up to $500 on the new iPhone SE when you trade in your old phone, as long as you have or switch to an eligible service plan. New customers without a device to trade in can still save $215 with a new line of service on a qualifying plan.

Spectrum is another carrier that has the 2022 iPhone SE available for purchase, though the deals are pretty slim. The only offer available is an extra $100 on top of the estimated value of your device with a qualifying trade-in and a new line of service.

Metro has the best prepaid offer of any retailer or carrier out there at the moment. When you purchase an iPhone SE at full retail price and switch your existing number over to Metro’s $40-per-month unlimited data plan, you’ll get an instant $330 rebate. Meaning you’re getting the iPhone SE for a single $100 purchase, rather than discounted via monthly credits. Those who don’t have a number to switch over can still save $100 with the activation of a new line on a qualifying Metro plan. If you’re looking to purchase your phone outright, this is the best offer you’ll find, though you’ll have to actually go to the store in person to claim it.

Note: Because Metro is owned by T-Mobile, this offer is not available to those switching their number from an existing T-Mobile plan.

Buy your new iPhone SE at Visible, port in your number and receive $250 back as a gift card to spend wherever Mastercard is accepted. The deal requires you to transfer your number within 30 days and after completing three full months of service payments you’ll receive a code to claim your virtual gift card.

Tesla is currently working on a redesign of the Model 3 in a bid to help the automaker reduce production costs, a new...
Read more

China could have 1,500 nuclear warheads by 2035: Pentagon report | CNN Politics