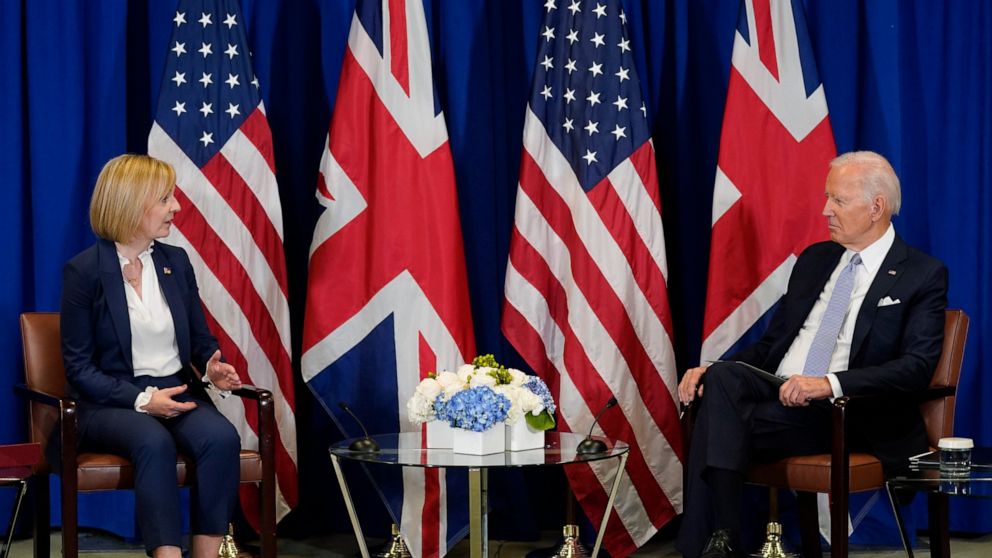 
UNITED NATIONS — U.S. President Joe Biden and U.K. Prime Minister Liz Truss declared themselves staunch allies Wednesday as they tried to patch up a divide over Brexit’s impact on peace in Northern Ireland.

The leaders met at the United Nations two days after they attended the funeral of Queen Elizabeth II in London, and Britain hopes the global goodwill toward the late queen will help smooth out bumps in relations with the U.S. and other allies caused by the U.K.’s departure from the European Union.

The U.S., in particular, is concerned that Brexit has rattled the foundations of the 1998 Good Friday peace accord that ended 30 years of sectarian violence.

At the end of the 75-minute meeting, Truss’ office said “the prime minister and President Biden both agreed that the priority must be protecting the Good Friday Agreement and preserving the gains of peace in Northern Ireland.”

Truss spokesman Max Blain said Northern Ireland took up a small part of the meeting at t he U.N. General Assembly in New York, which was dominated by the war in Ukraine and concern about the growing global clout of China.

But Northern Ireland was the issue that Biden chose to emphasize during televised remarks at the start of the meeting.

Biden noted that both he and Truss “are both are committed to protecting the Good Friday Agreement in Northern Ireland,” but subtly alluded to his concerns about her stance on the protocol.

“I am looking forward to hearing what’s on your mind,” Biden added.

Analysts say there is some trepidation in the White House that undercutting the Northern Ireland protocol could plunge Europe into trade turmoil at a moment when Biden is working mightily to keep the West unified in confronting Russia over its aggression against Ukraine.

Truss thanked the president and First Lady Jill Biden for coming to London for the queen’s funeral, and described the United States and Britain as “steadfast allies.” But she avoided referring to the trans-Atlantic partnership as a “special relationship,” shying away from the language her predecessors dating back to Winston Churchill have used.

Biden said Britain was “our closest ally in the world.”

Truss and Biden see eye to eye on Russia’s invasion of Ukraine, with Britain the biggest military contributor to Ukraine after the U.S.

On China, Truss’ concerns about Beijing’s “growing assertiveness” echo Biden’s views. And the two leaders share a concern that China is outflanking Western democracies in wooing the developing world.

The U.K. government said Truss and Biden “stressed the need to end over-reliance on authoritarian states in terms of our energy, technology and manufacturing supply chains” and vowed to “redouble efforts” to reduce energy dependence on Russia.

But Truss, who took office Sept. 6, faces skepticism from many U.S. diplomats and politicians over Brexit. Truss served as trade minister and foreign secretary under former Prime Minister Boris Johnson, a Brexit champion who plunged relations with the 27-nation EU into a chilly new era.

Seeking to break the impasse, Britain has announced legislation to suspend the checks and rip up part of its legally binding Brexit treaty with the EU — a move that angered the bloc and alarmed Washington.

The proudly Irish-American Biden has taken a particular interest in the issue. He has warned that no side should do anything to undermine the Good Friday Agreement, which the U.S. played a key role in negotiating.

Many pro-Brexit British politicians had promised any loss of trade with the EU would be easily replaced with increased exchanges fostered by free trade agreements with other countries, such as the U.S.

But Truss was forced to admit this week that a long-sought U.K.-U.S. free trade deal would not happen “in the short to medium term,” partially because of opposition in the Biden administration and Congress,

Since Johnson announced in July that he would resign, Britain has tried to take some of the rancor out of the Brexit dispute, and has toned down its language toward the EU. Truss said this week that her “preference is for a negotiated settlement,” though she is hanging onto her threat to rewrite the Brexit divorce deal.

Truss met Wednesday in New York with EU Commission President Ursula von der Leyen, though there was no sign of a breakthrough.